Nigel and Ann are a husband and wife inspection team. They inspect Charlesworth in Derbyshire High Peak - a big parish with 111 paths, and the smaller neighbouring parish of Chisworth (30 paths). Nigel comes from a PNFS family. His parents were inspectors back in the 1980s and the family tradition has been continued by his sister, Jane Hodgson, who has recently run or walked most of the paths 230 paths in Colne Valley. Here is their PNFS story in Nigel's words. 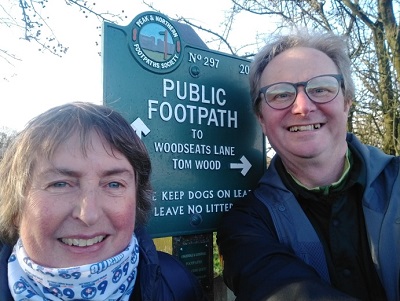 Ann and I became inspectors a few years ago. I suspect like many new volunteers, we felt we had more time and it seemed an interesting and worthwhile role. We were aware of the PNFS through my family: my dad and his brother were both inspectors in Staffordshire and my mum is a long-standing member. We even had one of my dad’s more dramatic inspection reports read at his funeral, which involved him returning home with no trousers on. Not something that’s happened to either of us yet fortunately. We have been fell walkers for many years and met through a local climbing club in the 1990s, although our rock climbing days now appear to be behind us. Ann was by far the better climber, which was handy when we transferred our attentions to a sailing boat, as it meant she was the one volunteered to go up the mast whenever a tricky job beckoned.

Some inspectors may prefer to do an area which is new to them, but we have our local patch in Charlesworth and find it very enjoyable to get to know bits of it that perhaps we wouldn’t otherwise. We tend to do most of the inspecting together and the parish is a good mix of rural and moorland paths, so there’s plenty of scope to make decent walks while inspecting at the same time. It’s also nice to be able to pop out for just a few hours and tick off a few paths any time you feel like it.

I joined the local Glossop Mountain Rescue Team at about the same time as we became inspectors and I have been able to align the two interests occasionally. Through the PNFS we got the Peak Park to reinstate one of their Pennine Way stone markers at a location on Bleaklow in Hern Clough. The path here makes a sharp turn, away from the clough, and many walkers have missed it and gone astray in bad visibility. The Park was not keen on a nice big PNFS green sign unfortunately, perhaps with flashing lights on, but maybe one day.

My sister Jane has now joined the pack, taking on her local patch in Marsden. That already seems to be throwing up more than its share of challenging situations, perhaps because some of the network includes little-used semi-rural paths and much of it has not been inspected in a while. I’m sure she will be doing her best to keep Kirklees Council on their toes. Speaking of councils (or, more correctly, Highway Authorities), I think it can fairly be said that one of the downsides of inspecting is the sometimes poor communication from the public officials. I am sure there must be some who are great at working collaboratively with us, but it is a little frustrating when some of our work appears to vanish into the void. Nevertheless, we press on regardless, of course (I think that was the title of my Dad’s report …) and it is three cheers for the Courts & Inquiries Officers for everything they do.

The technology we have these days to assist us is great. Phone mapping (Viewranger, OS maps, etc) makes it so much easier to be 100% accurate about the correct line of a right of way and also to record the pinpoint locations of faults - as an MRT member I should also say for keeping up your paper map skills as well. The PNFS FID makes record keeping and information sharing a breeze, which surely will have many long term benefits. Even online reporting to the local authorities is good as it makes it easy to give them what they need and hopefully do what we want.

I mentioned the iconic PNFS signs. We got one put up for my Dad - number 442 near Chapel, if you happen to be passing - and if we’d thought about it sooner, we should have got a photo of us next to it. But we didn’t, so instead the picture is with us at one of our local signs.

If you would like to become a Footpath Inspector for PNFS please contact David at inspection@pnfs.org.uk or ring 07841647275.

Next: PNFS, a poem