Boundaries take many forms and their impact on people who try to cross them varies widely as many a walker or traveller knows. Part of the Sheffield/Rotherham boundary follows the A630 dual carriageway which links Sheffield city centre with the M1 motorway. When constructed in the 1960s, it severed public footpaths in several locations. One of them is FP209. In a national survey by the Ramblers' some years ago ("You're quick, or you're dead"), it was listed as the second most dangerous crossing for walkers in the country. This has a knock-on effect on the rights of way that connect to it, and similar roads. Even now, road builders give only passing thought to the needs of non motorised users who have to get across these. Another footpath crossing only half a mile away from this one was legally extinguished a few years ago, not long after tax payers' money was spent building a flight of concrete steps with handrail to allow easier access up/down an embankment from the carriageway edge. What's that saying about left hand and right hand ...? 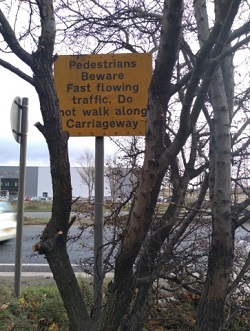 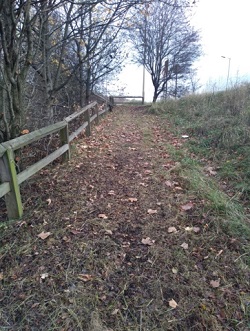 This crossing was rendered awkward by overgrowth on the ramp up to the carriageway edge. A warning sign at the edge was obscured by tree growth. On the Rotherham side, sight lines along the A630 were limited by shrubbery on the embankment. Precious seconds to judge traffic flows were thus denied to walkers. I filed a report to both Highway Authorities and action was taken to clear the tree growth and shrubbery. Until next time ... 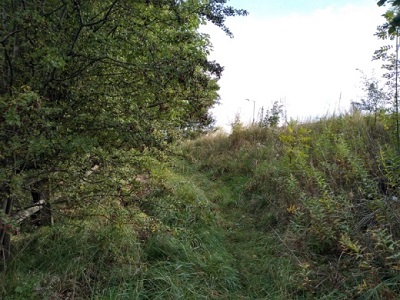 All this begs an interesting ethical question as to whether by reporting such problems, PNFS is encouraging users to risk their safety by using the crossing. I would argue that it is the road builders who bear the responsibility for failing to factor into schemes they advocate, sufficient safeguards for rights of way users of all kinds. In the sum total of a major road project, I suspect we are talking pocket money. The same could be said of major projects like HS2. In the 1960s maybe they didn't know any better. What's their excuse now ...?