At the end of October we had 537 signposts in total. As at 31 January 2020 we have only 536. No new signposts were erected in the three month period, so this is a report on our maintenance and inspection work.

In early November John and I reinstated S369 (the original S005) at Higher Hills Cottage and S001 at Carr Meadow. S369 is now fixed to a concrete stump. S371 at Claire Ho. Children’s Hospice, Wirral, turned up and was re-instated by their maintenance staff, who had found it fallen over and then briefly lost track of it. Robin Tutchings, Wirral’s PROW officer, mediated. I inspected and cleaned 8 of our signs and fitted MPs to Bridge 14 at Mobberley for David Bratt and to S227 at Ollerton IMO Brian Summerscales. S157 at Reeds Bridge, K’hulme was temporarily wedged. It will be reposted. S081 at Pickmere since 1935, was stolen from its roadside hedge, making a total of 5 signs stolen since May, plus a sixth (S273 at Prestbury) removed by Cheshire East contractors, when they renewed their fingerpost. With their permission, I fitted two new plaques to their fingerpost. As S081 was in a vulnerable, roadside position it will not be replaced, but the other four will. 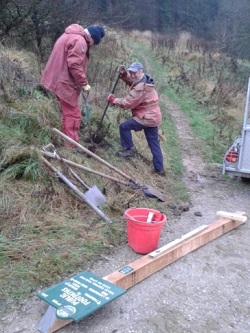 In December S292 in Glossop was reposted, repainted and re-instated. A new S258 replaced the old sign at Jumbles; the original had been burned and the plate lost. I inspected S129 at N. Turton, then fitted a new MP to S537 near Darwen Tower, IMO Sue Stephenson. On a cold, sunny Christmas Eve, I went to Alsop en le Dale to retrieve the fallen S327 and inspected/cleaned 11 more signs.

In January S381 at Higher Hurdsfield fell and was retrieved, then S354 at Weaver Hills was reported uprooted by off-roaders. The farmer will reinstate it when the land is less wet. It had only been reinstated on a concrete stump in October. This time the cows were innocent! I inspected/photographed 3 of our signs and 3 of our bridges on Gigg Brook, Compstall. S616 at Ashover has consent and awaits a site visit. 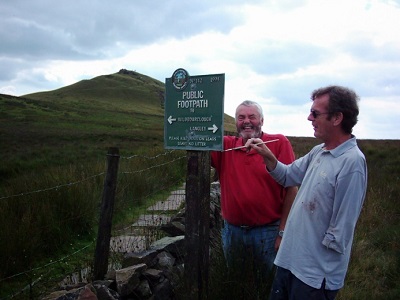 S142 being repainted by Pete and Mike

For more details of each signpost's location, go to Where They Are

Next: The Many Ways of Slow Ways