Removing or tampering with public footpath finger posts or waymarks seems to be the trend with some landowners in Shaw recently. One example of taking such liberties is Crompton (Oldham) FP96. This path was marked off Buckstones Road by a metal fingerpost, the blade of which went missing in March 2020 during the first lockdown period. I reported this to Oldham Highway Authority. A few months later a T (No Through Road) sign appeared on the post. I checked this out with Oldham Highway Authority and found that it was not put in place by them, the authority then removed the T sign and fitted a new Public Footpath blade only for it to be removed next day! Someone must be starting a nice collection of council signs, maybe in a shed somewhere! 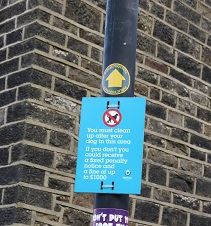 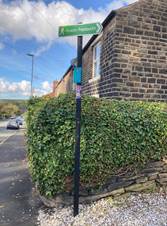 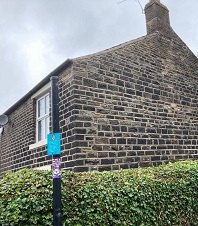 Fingerpost blade which has since disappeared

The Highway Authority say they cannot do any more about this as there is no proof of who is doing it. The path at this point is a wide track with surface chippings leading to a dead end for vehicles within a few yards - it seems to be used to park a car - the footpath then goes left at the end of the stone wall below the gable end (see photos). The footpath then goes between a leylandii hedge on one side and a fence on the other. This is what I mean about taking liberties: the gap here is 11 inches wide, in summer the leylandii grows rapidly across the gap. I usually get a friend to help with cutting back the hedge with hand shears. So there we have it. A post with no sign, and a very constricted footpath. I have got a Public Footpath disc sticky label which I have stuck on the post.