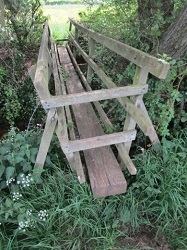 I reported a rail across a footbridge on Trusley FP11 because I felt this was an obstruction on the footpath. I have been reporting a number of railed boundary crossings, see also Bradbourne 17, which can be easy to ascend but then hazard to descend because of the difficulty to secure the boot heel on the intermediate rail or turn so that the sole can safely use the rail as a step down. I usually ask for a through step stool but at a bridge this can be difficult to install. Bridges have been installed by the Highway Authority, not the landowner but there are many of these rails across them so I'm pleased to have received the following reply from DCC which suggests that the rails may have been installed by landowners without authority: The rail has been attached to the footbridge, I've contacted our Structures Team for their advice and have been advised that the rail can be removed as it doesn’t appear to affect the footbridge structurally. We will arranging works to remove the rail as soon as possible.